Sud Vendee Tourism do a great job in promoting the attractions of the region with flair and imagination.

Imagine our surprise when their latest promotion featured a guided walk around Vouvant, we have no idea where they got that idea from!

Have they by chance been looking at our suggested itineraries including our one for Vouvant?

If they do something similar for Fontenay we might have to have words with them!

We love our tags for the autoroutes, cruising through the tolls without the stress and hassle of having to find your ticket and then pay using cash or a card is a simple pleasure. More than once in the past we have been caught out by certain UK cards not being accepted at the toll booths.

Rhinocarhire.com have a special offer available that means you can avoid the €10 application fee and you don’t even have to hire a car through them to enjoy this discount.

Even if you will not be travelling the autoroutes this year getting a tag is still a good idea for future travels.

Sud Vendée Tourism do a great job of promoting the region, their latest example can be viewed using this link.

You don’t have to rely upon Sud Vendée Tourism or ourselves, here is Lonely Planet’s view of the attractions of the Poitou-Charentes region.

Back at the end of May we had written off 2020 due to the Coronavirus pandemic, Europe was in lockdown mode and no one was booking a holiday. That all changed in June and in a short space of time we went from no bookings to being booked for the whole season.

We appreciate that anyone booking a stay with us is making an act of faith and trusting that we will live up to their expectations. Our tag line is Happy Holidays Happen Here and we do all that we can to ensure that this happens.

Our Gite is well maintained, well equipped and always spotlessly clean. Due to Covid19 we are taking additional measures to ensure that our guests are provided with a clean and safe environment, sadly this has meant some homely touches have been sacrificed but their health and well-being is much more important.

We have had 3 families stay with us so far this summer and they have all been delighted with what they found and kind enough to leave us with 10/10 reviews on Gites.com which we have also added to our testimonials page. This continues our long standing high scoring amongst our guests. Having achieved this we do all that we can to ensure that we continue to score highly with our guests.

This feedback is not only enormously important to us but also confirmation that what we are doing is appreciated by those who have shown their faith in us by booking their family holiday here at la Ménantelière.

We are looking forward to keeping up this winning habit.

This picture has pride of place in our kitchen. It was created for us by Noe and Ona who stayed with us recently.

It is our first ever thank you picture and really made our day to think that our little guests would take the time to make this lovely picture during their holiday.

As you can see Noe and Ona loved the swimming pool.

We work hard to ensure that our guests have the best holiday experience with us and it looks like Noe and Ona certainly did.

It was lovely to be able to show them the gardens, to let them pick freshly grown fruit and vegetables and for them to feed our pigs and the chickens next door. We think that for little ones this kind of experience is invaluable in learning where food comes from.

They also liked seeing Ruby and Ada, our two outdoor cats who like being close to humans and really want to be indoors cats.

Best of all was hearing the shrieks of delight and laughter as they enjoyed their time in the pool. Is it any wonder that that they drew us a mermaid?

We say that Happy Holidays Happen Here and for Noe and Ona it looks like we kept our promise. 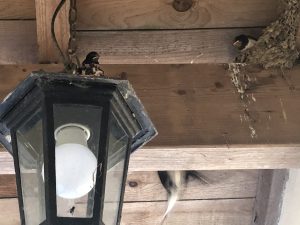 A quite magical moment. Every year we have swallows nest above our front door, our visitors from North Africa. It is always a sign that summer is on the way when they arrive.

They typically they have two separate clutches each year. The noise from the nest as the parents swoop in with beaks full of insects to feed their brood gets louder and louder as the chicks grow.

The other evening the noise was unreal. I opened the door to see four chicks out of the nest and before I could take this photo two of them flew the nest, moments after this photo these two did the same never to return as chicks. From dependent to independent in the blink of an eye.

In a few weeks they will be making the long flight to North Africa and in less than 9 months time the cycle will repeat.

David Bowie’s Glastonbury 2000 performance was recently broadcast in it’s entirety for the first time on the BBC.

One of the songs included in his set was a lesser known song but one that neatly reprises one of his earliest hits, space oddity.

The song in question was “hello spaceboy” and it is an appropriate song for when stargazing here at la Ménantelière.

We are fortunate to have no light pollution and on a clear night the sky above is a wonder to behold.

Apart from the planets, stars and meteorites we see space hardware in the form of satellites traversing the night sky, tracing a steady constant path from one horizon to the other.

The real standout event when surveying the heavens is when the ISS passes overhead. It is closer to us than we are to Paris but seems to be a world away.

We will next be looking at the International Space Station 10 Jul at 5:01 AM! – Generated with the ISS Spotter App, why not download it to see when it is passing over you.

We had our first meal out since the Covid19 lockdown was imposed at le Lion D’Or just down the road from us at la Ménantelière in St Hilaire de Voust. Our meal was great value and of the usual high quality and enlivened as always by Patricia and her staff.

We recommend their Moules Frites when it is available.

You can see about them on their Facebook page, Bon Appetite!

Sud Vendée tourism are extolling the attractions of the forest of Mervent in their latest Faceboook post. We wholeheartedly agree with them, it is a wonderful place to wander.

Lonely Planet’s Best in Travel has listed Poitou-Charentes as one of the Top Ten Regions of the world to visit:

“What makes Poitou-Charentes so different from the rest of France is that it encapsulates the best of France in one small, easily digestible region. Put simply, Poitou-Charentes combines all the best clichés of the French countryside – the sleepy rural villages, the endless fields of sunflowers and the delicious food and drink – and this alone makes it different from every other region in the country.”

“Much more laid back than the Med (but with almost as much sunshine) and ideally suited to family holidays, this is a place where you can slow the pace right down, settle in and indulge in the finer things life has to offer.”

We use cookies on our website to give you the most relevant experience by remembering your preferences and repeat visits. By clicking “Accept”, you consent to the use of ALL the cookies.
Cookie settingsACCEPT
Manage consent

This website uses cookies to improve your experience while you navigate through the website. Out of these, the cookies that are categorized as necessary are stored on your browser as they are essential for the working of basic functionalities of the website. We also use third-party cookies that help us analyze and understand how you use this website. These cookies will be stored in your browser only with your consent. You also have the option to opt-out of these cookies. But opting out of some of these cookies may affect your browsing experience.
Necessary Always Enabled

Performance cookies are used to understand and analyze the key performance indexes of the website which helps in delivering a better user experience for the visitors.

Analytical cookies are used to understand how visitors interact with the website. These cookies help provide information on metrics the number of visitors, bounce rate, traffic source, etc.

Advertisement cookies are used to provide visitors with relevant ads and marketing campaigns. These cookies track visitors across websites and collect information to provide customized ads.

Other uncategorized cookies are those that are being analyzed and have not been classified into a category as yet.